Imagine chasing a chicken in heels and a dress. This was the experience sophomore Carmen Findley had on the night of convocation, a mere few days after moving into the Sustainability House for the 2013-2014 academic year. Findley was joined by fellow sophomores Chandelle Ulmer and Emilee Prestridge, who have agreed to give reflections and updates on the goings on of the house and its many projects and endeavors.

LaGrange College acquired the Sustainability House through various gifts and purchases, along with several other properties. It is designated as a “theme house,” because, unlike the fraternity and sorority houses, it is centered around an overarching theme of sustainability. In order to obtain residency there, students must go through an application process involving proposals that explain their goals in using the house. These plans must involve projects and activities that work to advance sustainability.

Their proposals must also include evidence of reaching out, as noted by Ulmer, who explained that applicants are required to declare just how their endeavors will “translate into the community.” The Sustainability Council and Student Housing review the applications and determine the new residents for each academic year. Student occupants are not subject to extra fees, but must pay utilities as well as cable and Internet services.

Ulmer remarked that life in the house can be challenging, as she and her roommates must share many responsibilities. She admitted that it has thus far been “a challenge balancing school work and sustainability.” She expresses a belief, however, that her involvement with student government has kept her alert on what all must be done. As Director of Service and Sustainability, she claims, “being on SGA has mademe more accountable.”

The chickens are a unique responsibility at the house. Findley lamented having to “get [a chicken] back in the cage in heels and a dress.” The chickens, Ulmer explained, have been a tradition in sustainability; they provide eggs for both the house and the soup kitchen at Broad Street Church of Christ.

Ulmer also cited coordination as a challenge at the house, as “figuring out who has to do what” can be hectic with the girls’ busy schedules. In addition to maintaining the chicken coop, the residents also proposed to plant a carrot garden, keep daily compost, use a drying rack for small loads of laundry, recycle, and join campus minister Blair Tolbert in donating clothes to the Emmaus House, a women’s shelter. 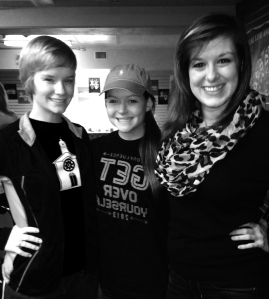 This charity work adds a new dimension to the term “sustainability,” as it can mean making any effort to bettering the community and its people.

Staying at the Sustainability House also entails fulfilling many adult responsibilities the students hadn’t tackled before. Ulmer described paying bills as “stressful,” but noted the exposure to such tasks as important. “In the real world, you have to pay bills on time,” Ulmer said.

Findley has called making deadlines “a huge struggle,” as the bills “all fall at the same time.” She recalled a comical situation, laughing that they had to “[drive] to the cable place the day it was due!” In addition, Findley noted the house has made them more self-sustainable. She commented, “I feel like an adult,” and described living at the house as “a lesson in real world responsibilities.”

Ulmer summed up the living conditions: “We each have responsibilities or nothing would get done.”

The girls have also attested to learning much about sustainability in just their first three months at the property. “[Sustainability] had always been a big part of my life, but this has made me aware of just how sustainable we could be.”

Prestridge, likewise, said that her time in the house has already “taught [her] a lot about service and sustainability and ways to reach out to the community.”

The Sustainability House isn’t a set program, as its theme is subject to change. All three current residents resist altering the program, believing it beneficial as is. Ulmer described the house as a “benefit to the college and community.” She also cited its promotion of environmental awareness, observing that “the way our world is going, we won’t have an Earth.”

The Sustainability House is expected to continue next year, with the current residents intending to re-apply.