The rolling hills, lush trees, and striking mountains provided only a slight idea of the experience I was driving up to when I pulled into Camp Grandview, a Salvation Army Camp in Jasper, Georgia.

This summer, I was a camp counselor at Camp Grandview in the beautiful North Georgia mountains. The job description entailed living in a cabin for nearly eight weeks with different campers each week. Each day, we were responsible for waking up the campers (who numbered between seven and eighteen per cabin) and leading them through all the day’s activities, including flag raising, breakfast, swimming, and more.

In theory, it’s a very simple and structured day, but anyone who has worked with kids knows that every day is an adventure. For the first half of the summer, I mostly had seven- to nine-year-old girls who came from inner city Atlanta community groups in my cabin; the the remainder of the summer, I oversaw Salvation Army church kids from around Georgia. 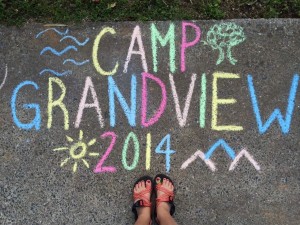 The camp directors, Captain Matt and his wife Captain Jamie Satterlee, noted that the camp provides an opportunity for these children to receive the essential meals they’d been lacking: at Grandview, they receive the proper three meals a day, as well as two snacks. Jamie added that the camp also provides a safe haven for children like my campers who may have difficult home lives. It is an escape, if only for a week, into a fun, constructive environment.

Of all the activities at Grandview, the most enlightening was the devotional saved for the end of the day. Each night, the campers would meet at a beautiful, glowing cross for Vespers, a devotional led by the camp staff. The name simply comes from the Greek word for “evening.” The staff member leading would often play music and then teach the campers various Christian lessons. In the words of Jamie and Matt, the service is valuable to campers in that it “provides a way for them to wind down after a rowdy night program” and is meant as “another opportunity for the kids to learn about Jesus.”

Captain Jamie also found that many “spiritual victories” occurred during Vespers, noting that the kids seemed to grasp the concepts being presented, despite being young. She was happy to say that in just one evening this summer, two-thirds of the campers put their faith in Jesus Christ.

Overall, I learned a lot about what it means to work with children over the summer. It means answering silly questions as well as the deep ones. For example, some had never seen blue eyes and wondered how it was possible, while others wondered about the divinity of Jesus Christ. It means sacrificing your own time and pouring that time into their lives. It also means listening when a child has something important to say. Sometimes, it just means holding her hand as you walk from place to place or putting a bandaid on her knee.

Working at Camp Grandview was a daily routine of leading and impacting the lives of children in the middle of the glorious North Georgia mountains. The mixture of the two made for a priceless summer that was both immersive in God’s creation and enlightening of His word. The transformative experiences at Camp Grandview are indispensable to improving a child’s future, and shows that simple leadership and conversation can make a world of difference in a child’s life.

This story is so great! But it’s also potentially troubling and upsetting. Read it!
Our latest article at lchilltopnews.org. #lctransforms #lchilltop #lcblackstudentunion
Fair on the Hill!
Fair on the Hill 2018. Come by and sign up to earn some $$$! #lctransforms #lagrangecollege
At LC’s Winter Preview day. Come by and learn about the Hilltop and the English program!
Special issue now available at LC Hilltop News.org!