This semester, LaGrange College welcomed a chapter of the organization Girl Power and Emerging Women (GPEW), which serves to empower and guide struggling young women. At the first meeting, which was held in the Boopie on the evening of September 11 to an audience of eight girls and women, co-founder Denise Mosley excitedly explained the company’s vision and plans for the future.

Girl Power and Emerging Women began as simply Iylana Mosley’s pageant platform. However, she knew that it had the potential to help other girls work and grow together to lead successful, independent, and fulfilling lives. In September 2012, Iyanla collaborated with Denise Mosley, her mother, to transform her idea into a company and organization.

Denise and Iyanla want to inspire and guide the lives of young women as they enter “the social and community arena of true involvement in the world.” The mission of GPEW is to inspire girls and young women to be strong, smart, and bold, “encouraging them to embrace their value and potential.” By connecting girls with women leaders throughout the world, GPEW equips them with the tools for leadership roles and community action.

During an icebreaker, I spoke to LaGrange native Jenaya Lindsey about her experience as a member of Girl Power and Emerging Women. Like most eleven-year-old girls, Jenaya enjoys singing and dancing and being around her friends, though her involvement in GPEW has inspired her to live up to her potential in all aspects of life. When I asked her what she enjoys most about the organization, she immediately told me that she is most happy for the simple fact that she’s become more passionate about herself.

Many girls and young women, though they come from different environments and backgrounds, experience similar 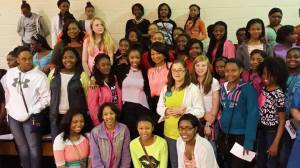 problems which they are not always comfortable discussing with their mothers, yearning for a supporter who they can better relate to.  In response to this, Girl Power and Emerging Women fosters an environment that can bridge the generational gap between a mother and daughter, while providing a support system to guide girls and young women to make empowered decisions and challenge them to have conversations about difficult topics.

However, beginning a chapter here on the Hill is only the beginning for Girl Power and Emerging Women. The organization already provides programs in the form of workshops, seminars, conferences, and school events that focus on building confident leaders among girls and young women in local, regional, and national communities.

But Iyanla and Denise Mosley want the ladies of LaGrange College to be involved. Over the next three years, Girl Power and Emerging Women hopes to grow its reach through a campus fashion show, as well as various events, Art and S.T.E.M. (Science, Technology, Engineering, and Mathematics) workshops, and a docu-film in which twenty influential girls and women will be featured.

Girls in the LaGrange community look to the women of LaGrange College as role models; they want to be us one day, but often think they may never have the opportunity to be in our shoes. Where will you leave your footprints?

This story is so great! But it’s also potentially troubling and upsetting. Read it!
Our latest article at lchilltopnews.org. #lctransforms #lchilltop #lcblackstudentunion
Fair on the Hill!
Fair on the Hill 2018. Come by and sign up to earn some $$$! #lctransforms #lagrangecollege
At LC’s Winter Preview day. Come by and learn about the Hilltop and the English program!
Special issue now available at LC Hilltop News.org!